Community sign in
Turn on suggestions
Auto-suggest helps you quickly narrow down your search results by suggesting possible matches as you type.
Showing results for
Search instead for
Did you mean:
Options

What is a callback in the Sinch Voice world?

When using the Sinch Voice platform in many use cases a callback server will be required to control the flow of a call.

Why do I need a callback server?

This is for you to be able to have control over certain elements, such as: authorising calls, routing calls, setting a cli (calling line identifier) to the receiving user.  It is mandatory to have a callback server for calling a PSTN destination

What do I need to implement a callback server?

You will need an application server that can parse incoming HTTP POST requests and return HTTP POST responses with SVAML commands (json) in the HTTP body.  Some example callback severs can be found here: Sinch Github voice samples or for simple testing you can use a service such as https://webhook.site

Where do I configure my callback server URL?

SVAML is a call control markup language developed by Sinch. When your application or server receives a callback event from the Sinch Voice platform, it can respond with a SVAML object to control the voice call. https://developers.sinch.com/docs/voice/api-reference/svaml/

What are the call events you send?

The figure below illustrates the lifecycle of a call and shows where both callbacks and REST API calls are located or can be made. 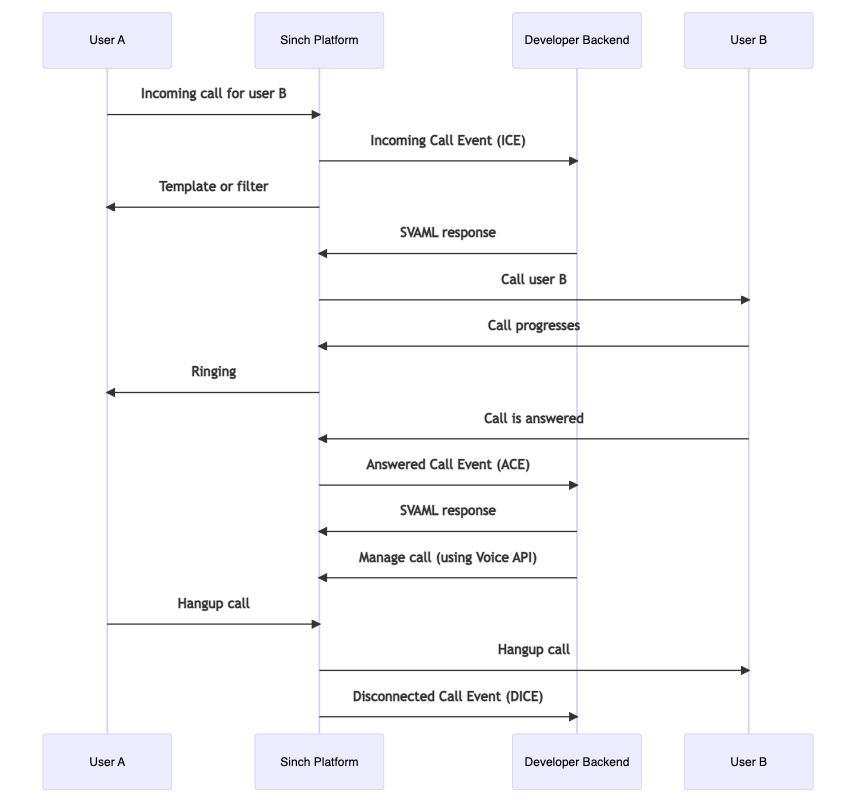 Roland_Ian
Options
Was this article helpful? Yes No
No ratings
Ask a question
Version history
Last update:
‎11-16-2022 07:25 AM
Updated by: